The Rise of Cigars and Cigar-Smoking Harms

Although cigarette smoking has been slowly declining, total consumption of cigars in the United States has increased dramatically since 1993, reversing a decline in consumption that had persisted for most of the twentieth century. Between 2000 and 2014, for example, cigar consumption increased by 122 percent while cigarette consumption declined by 40 percent. Unfortunately, many mistakenly believe that cigars are not harmful, but, in fact, cigars are addictive and harmful and are often marketed in a wide variety of kid attracting flavors. 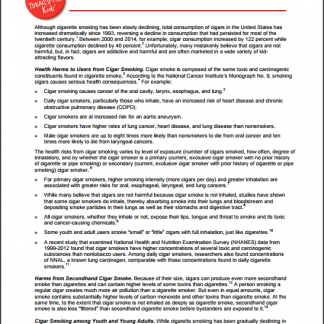 You're viewing: The Rise of Cigars and Cigar-Smoking Harms $0.00
Add to cart