Gender, Sexuality, and 21st Century Policing: Protecting the Rights of the LGBTQ+ Community

Abstract:  Nearly 20 percent of hate crimes reported to the FBI in 2015 were based on a victim’s sexual orientation, gender, or gender identity. In addition to being frequent victims of hate crimes, the LGBTQ+ community has a long history of experiencing harassment and discrimination by law enforcement. As a result, many lesbian, gay, bisexual, transgender, and queer individuals feel that they are not provided with the same degree of respect and protection that other Americans enjoy and are often reluctant to report crimes or ask for help. To address this problem and explore ways to repair relations with LGBTQ+ communities, the COPS Office, in partnership with Strategic Applications International, hosted a forum on gender, sexuality, and 21st-century policing. This report documents the discussions and recommendations of the forum’s participants, who came together from police departments and LGBTQ+ advocacy groups to explore ways to reshape policies; improve hiring, training, and communications; and identify strategies for eliminating bias against the LGBTQ+ community. In doing so, participants acknowledged police departments making progress in these efforts, and the report includes descriptions of those programs. 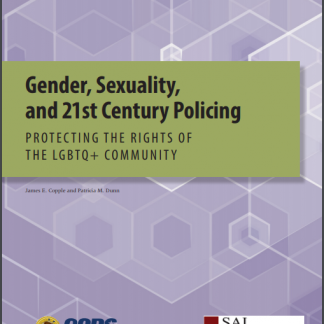 You're viewing: Gender, Sexuality, and 21st Century Policing: Protecting the Rights of the LGBTQ+ Community $0.00
Add to cart