Are Steroids Worth the Risk

Dominic has baseball on the brain. Just being good isn’t enough — he wants to be the best. He dreams of playing in the majors someday, but worries about the intense competition for a position on a major league team. His girlfriend, Deborah, is also a highly competitive athlete whose appearance and performance are very important to her. She wants to stand out — both physically and athletically. Because of the pressure they each feel to excel, Dominic and Deborah wonder whether steroids would help them. They’ve heard rumors about the bad side effects of steroids, but they don’t have many facts. Here’s the scoop on steroids. 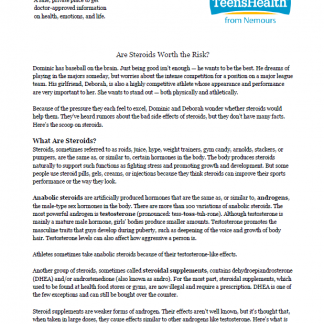 You're viewing: Are Steroids Worth the Risk $0.00
Add to cart