Alcohol Use Disorder: A Comparison Between DSM–IV and DSM–5

In May 2013, the American Psychiatric Association issued the 5th edition of the Diagnostic and Statistical Manual of Mental Disorders (DSM–5). Although there is considerable overlap between DSM–5 and DSM–IV, the prior edition, there are several important differences. 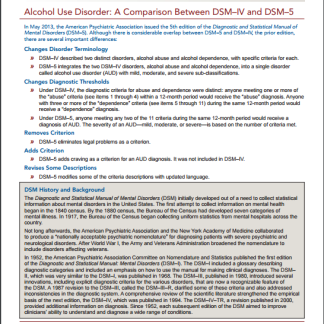 You're viewing: Alcohol Use Disorder: A Comparison Between DSM–IV and DSM–5 $0.00
Add to cart